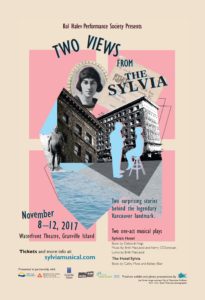 Two Views from the Sylvia is an exciting musical and theatre production of two original one-act plays about The Sylvia Hotel.

The first play, “Sylvia’s Hotel”, is set in Vancouver in 1912. It brings to life the origin of the Sylvia Hotel and the story of the Goldstein family who built it. Both young Sylvia Goldstein and Joe Fortes, the beloved lifeguard who taught Vancouver children to swim, experience the challenges of those who didn’t quite “belong” in the Vancouver of the time.

In the second play, “The Hotel Sylvia”, the story continues as we meet the characters whose lives and loves became interwoven with the story of The Sylvia over her 100-year history.

As well, the plays deal with the universal and timeless struggles of young people to find their identity – and older ones to hold onto their dreams.

The premiere of Two Views from the Sylvia, a uniquely Vancouver story, was presented by Kol Halev Performance Society November 8–12, 2017 at the Waterfront Theatre on Granville Island. The production sold out every performance, attracting locals and visitors alike with a wide variety of interests – the hotel itself, Vancouver and her colourful history, the notable Joe Fortes, and the contributions and challenges of early Vancouver’s Jewish community.

Below, you can listen to the interview that Margaret Gallagher conducted with Advah Soudack (“Sylvia”), Adam Abrams (“Abraham”), and producer Sue Cohene. There was also a related article on the CBC website.

We are thrilled that our playwright for “Sylvia’s Hotel”, Deborah Vogt, has received excellent reviews after presenting excerpts of this work to influential members of Vancouver’s artistic community. We are also excited to have Britt MacLeod as composer-lyricist. Britt and Deborah recently won Pick of the Fringe for Carry-On,The Musical. Also on board is Kerry O’Donovan as co-composer.

Award-winning writer Cathy Moss and established playwright Kelsey Blair have collaborated on the script of “The Hotel Sylvia”. Award-winning director Chris King and sought-after choreographer Shelley Stewart Hunt are also part of our team. We are so lucky to have Richard Henriquez (architect of the Sylvia Hotel renovation) and Ivan Sayers (fashion historian and past curator of the Vancouver Museum) as consultants on this project.

We would like to express our thanks to the City of Vancouver, the BC Arts Council and the Province of British Columbia, and Granville Island Cultural Society and CMHC, for their generous financial support and partnership.

We are also grateful to our partner, the Jewish Museum and Archives of BC, for their administrative support, and for developing a preshow photo exhibit for display in the Waterfront Theatre. We appreciate the assistance of Heritage BC and the Peretz Center for Secular Jewish Culture for helping to promote this project.